Reflecting back on THIRTEEN years of... 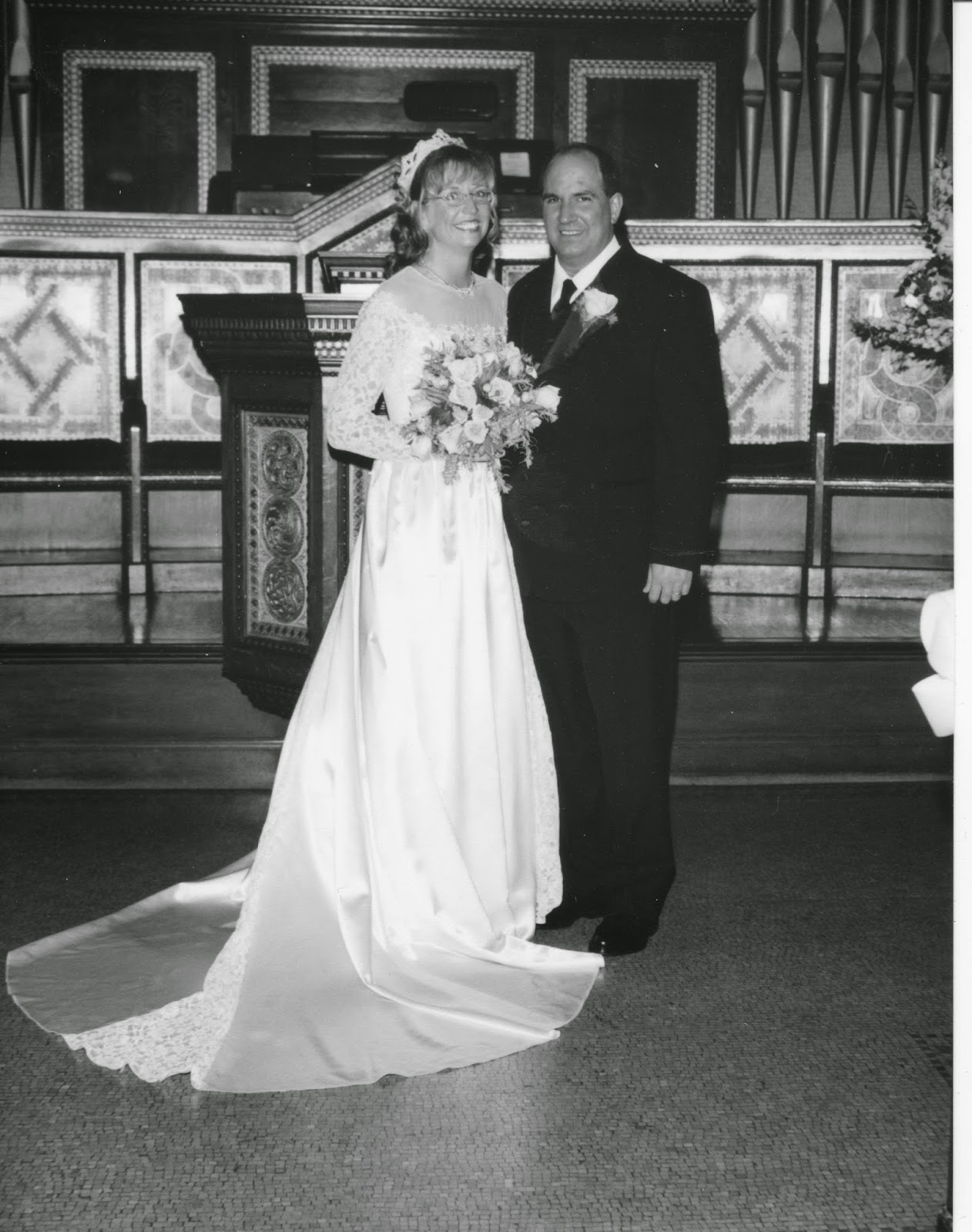 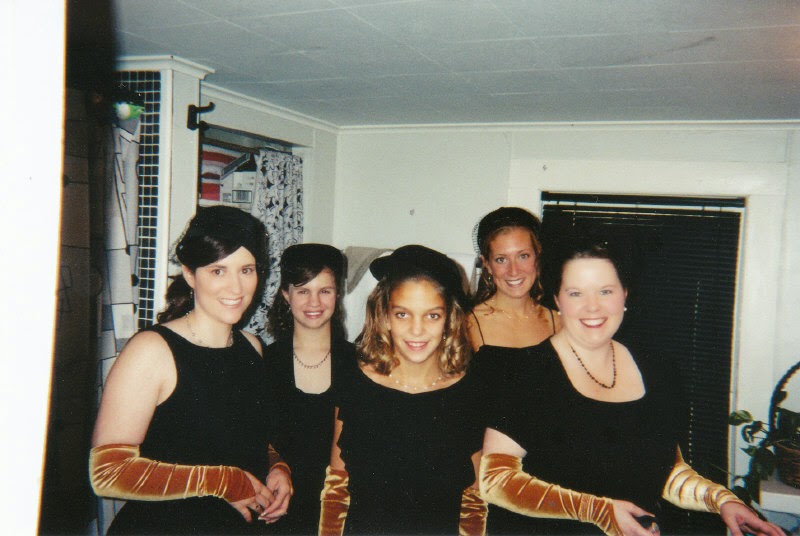 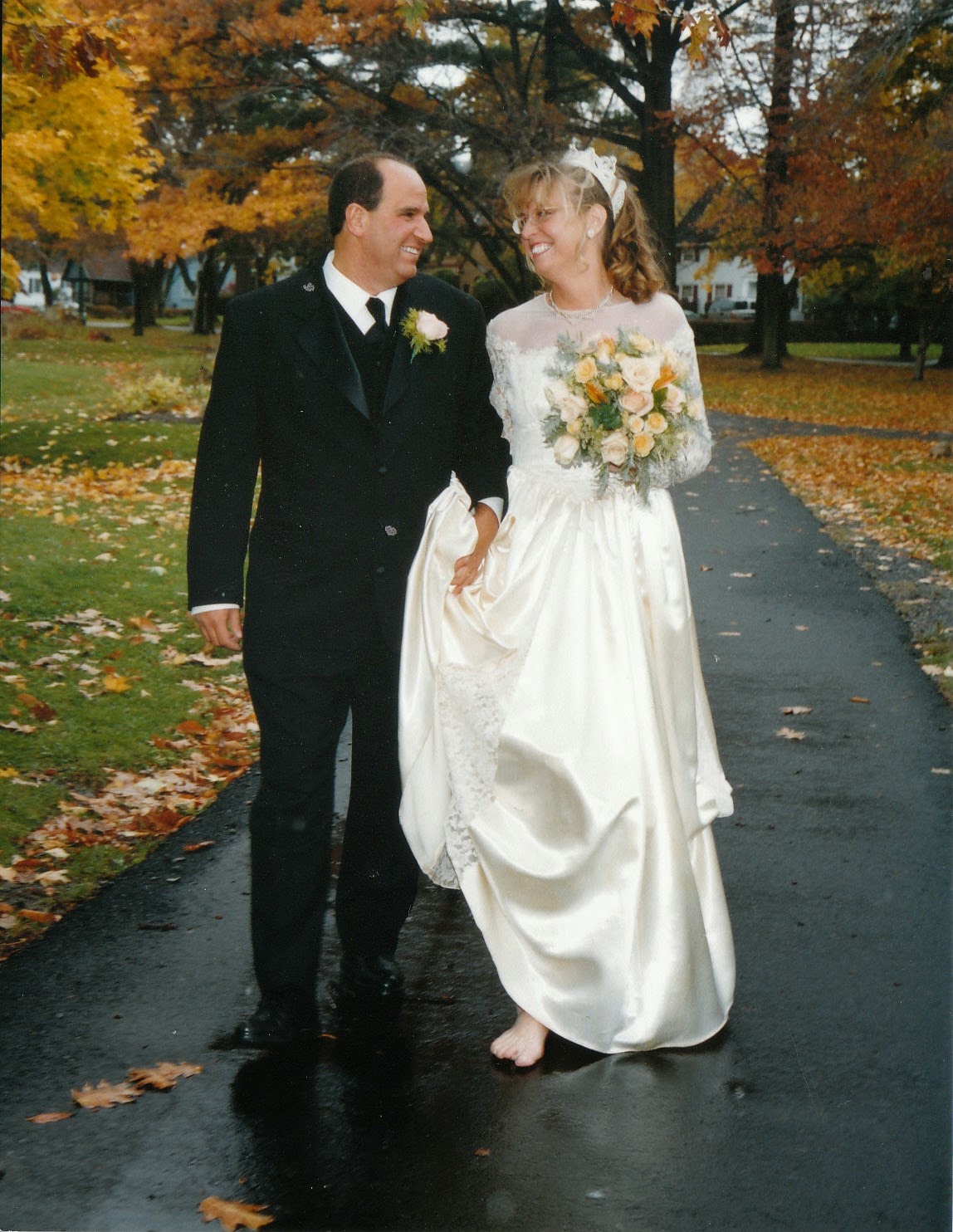 Labels: anniversary, Life is a Journey

Some like to refer to 2yr olds as 'TERRIBLE', I personally adore this age!!  (maybe it's because I'm not The Mom??)
Well, we have the SWEETEST little one living next door to us, who will be TWO on 10/30
(OH, SOOOOO close to my Favorite Holiday!!)
J & I wanted to give her something little for her birthday - BUT, What do you give the little girl who has EVERYTHING??? 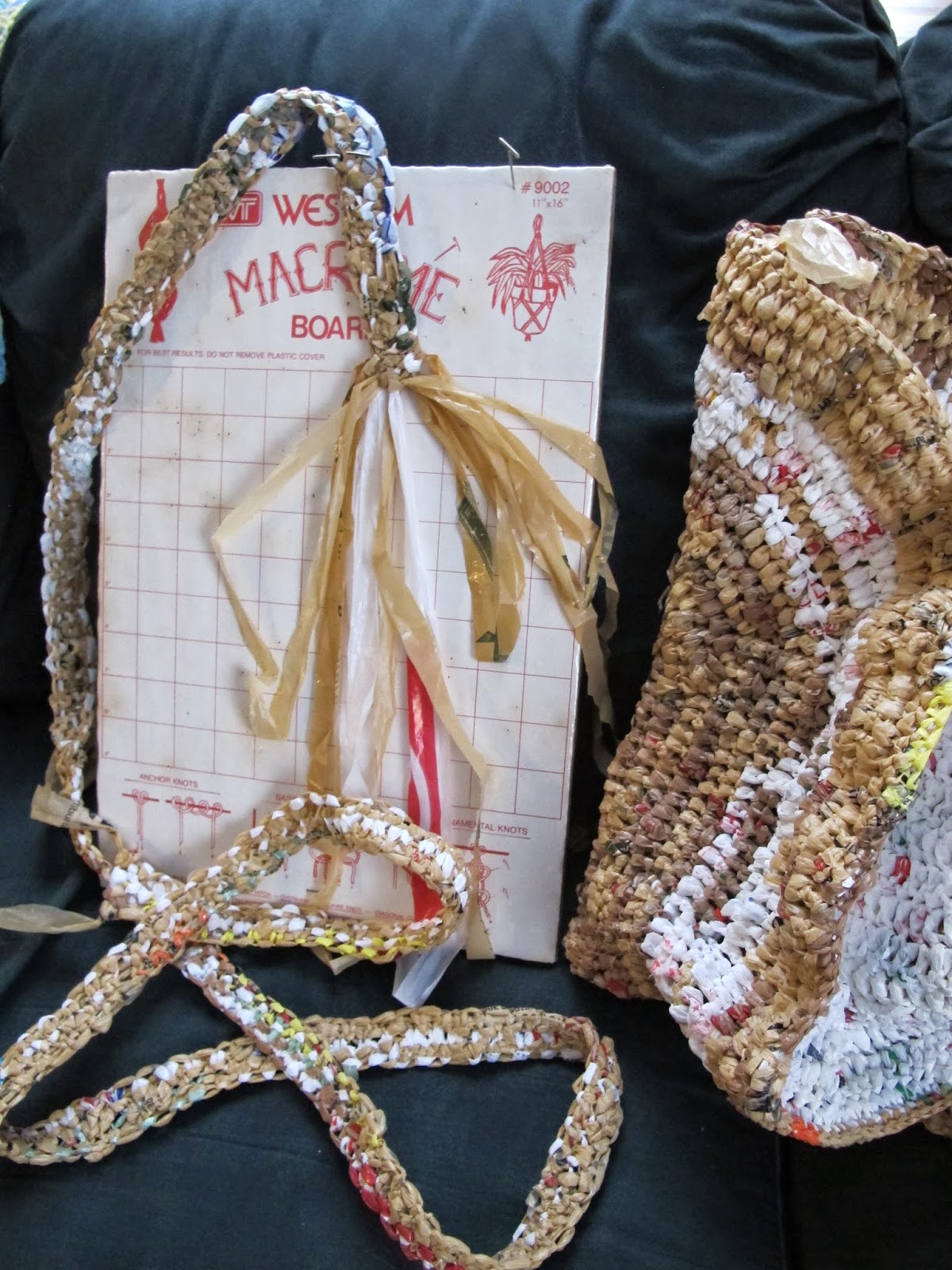 It has been said before that I'm "easily amused" and "a cheap date" - often taken as  'less-than-flattering' statements, but I guess it's true.

Hit a 'Final Day' Church Rummage sale on Saturday -
"FILL A BOX FOR THREE BUCKS"!
(Just buy a 'print paper box' and fill it with whatever you can!)
and OH what FUN was had...

As always, LOTS of 'stuff with potential' (ie: craft supplies)
A FEW THINGS THAT WERE ALL ABOUT ME! 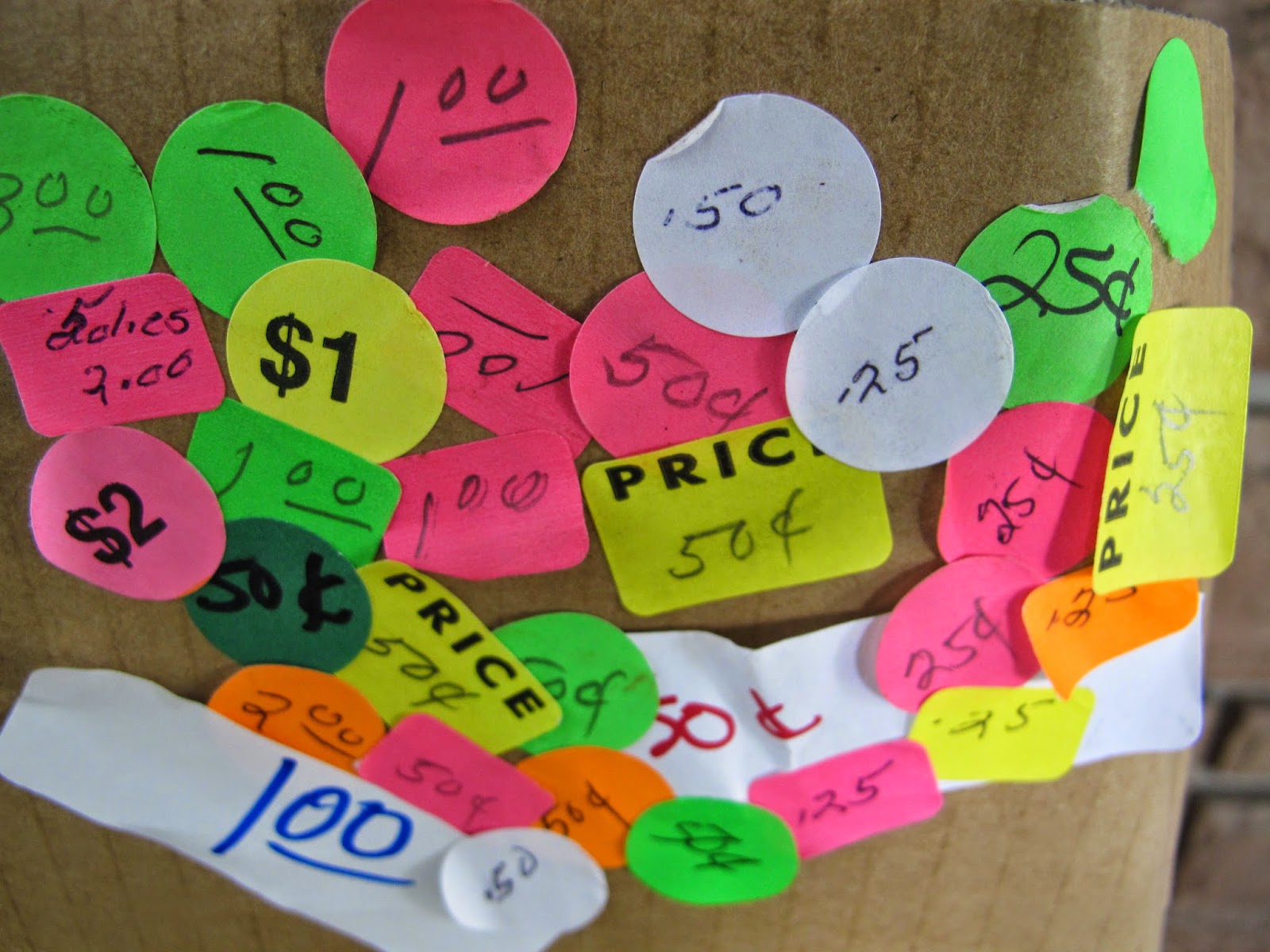 Labels: 'stuffing it', Life is a Journey

I 'needed' a little 'therapy' on Tuesday, so I made a jaunt to one of my favorite thrifts.  I soon found that I just.wasn't.into.it (!??!) 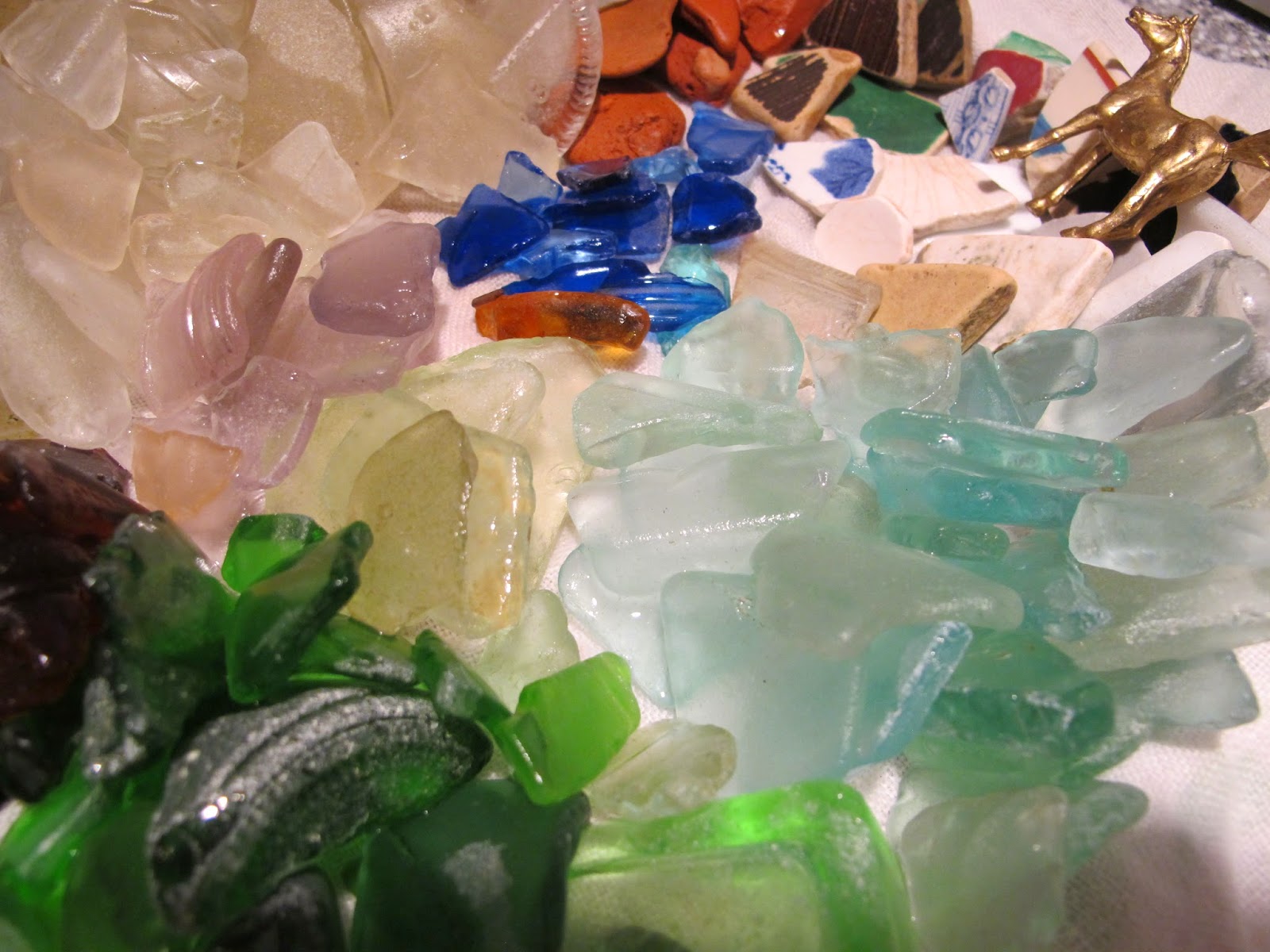 Soooo......
I decided to take advantage of the sunny afternoon, and try another form of 'therapy' ~
I headed to 'my' seaglass beach... 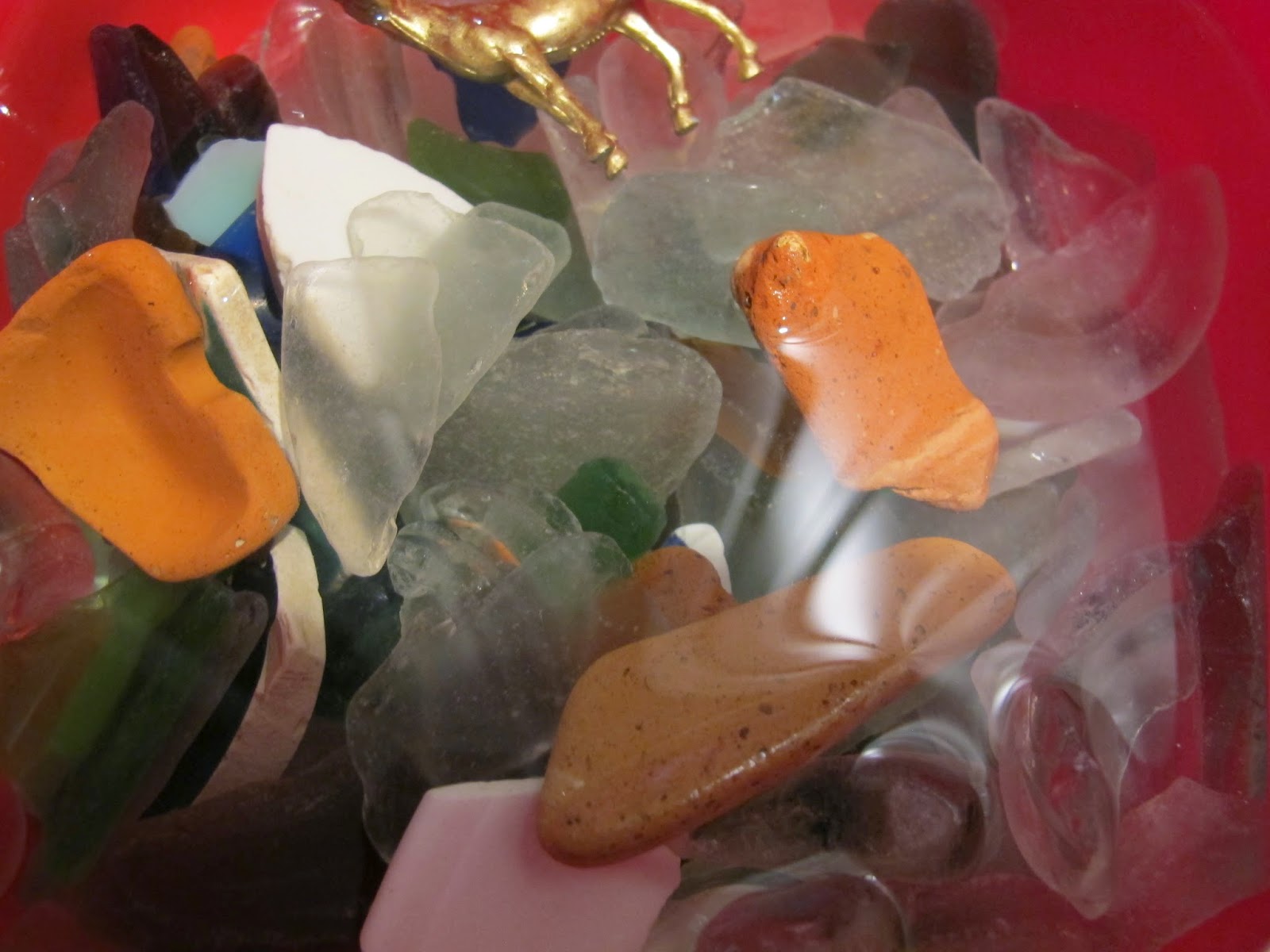 Now, mind you, 'my' seaglassing spot isn't really a beach, per se'.  It is merely a small strip of land on the North Shore of one of the larger Finger Lakes with water access.  It's on the edge of a park, between piers and boat launches.  You have to climb through over growth, to find the 5'-10' x 100' strip of heavily littered and neglected area of 'sandy beach' adjacent to the water's edge.

You can imagine my 'disappointment' when I arrived, and found two older women already 'combing' 'MY' beach!  In good seaglassing form, I started my search on the opposite end from where these women were.  I was PLEASANTLY SURPRISED to find that it was a 'stellar' day for seaglass though!  BIG WAVES were bringing in new specimens as I watched, and 'dove' for them before the waves carried them back out.

As my path crossed with the two women, I chatted with one of them (the other was clearly Disgusted that I was there!).  In usual 'beach combing' form, the woman eyed my quart size ziploc, and asked what I was looking for...  I told her 'Whatever catches my eye!'.  It was then that I glanced toward the LARGE grocery bag she was rapidly filling.  She closed it abruptly and stated "Oh, that's my bra, I had to take it off because it was bothering me and my boob kept falling out"
OH MY!!  T.M.I !!! 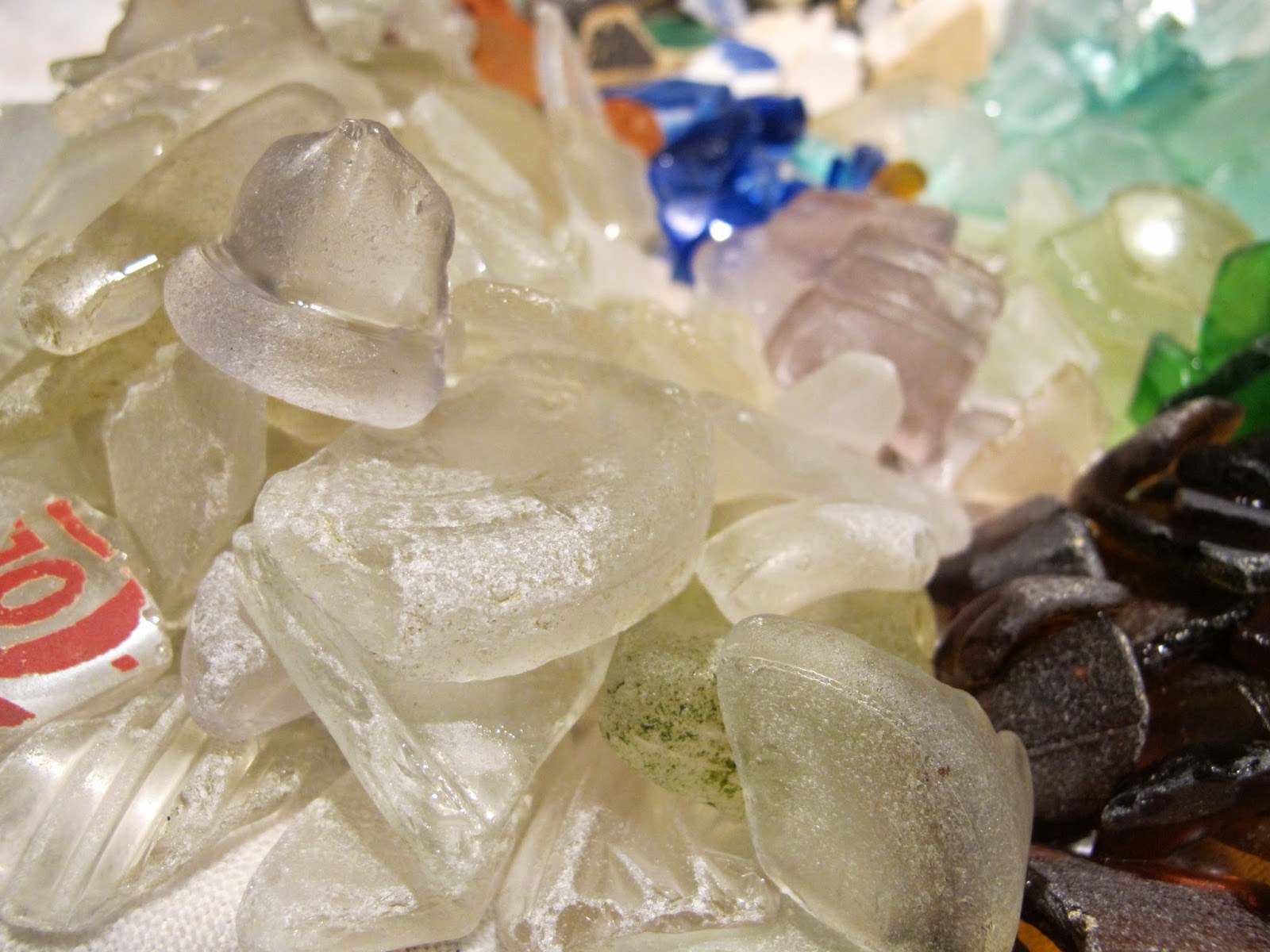 My afternoon of soaking up a few 'rays',  yielded 'the most' seaglass I have EVER gotten in one quest, an 'interesting' encounter, and proper 'therapy'! 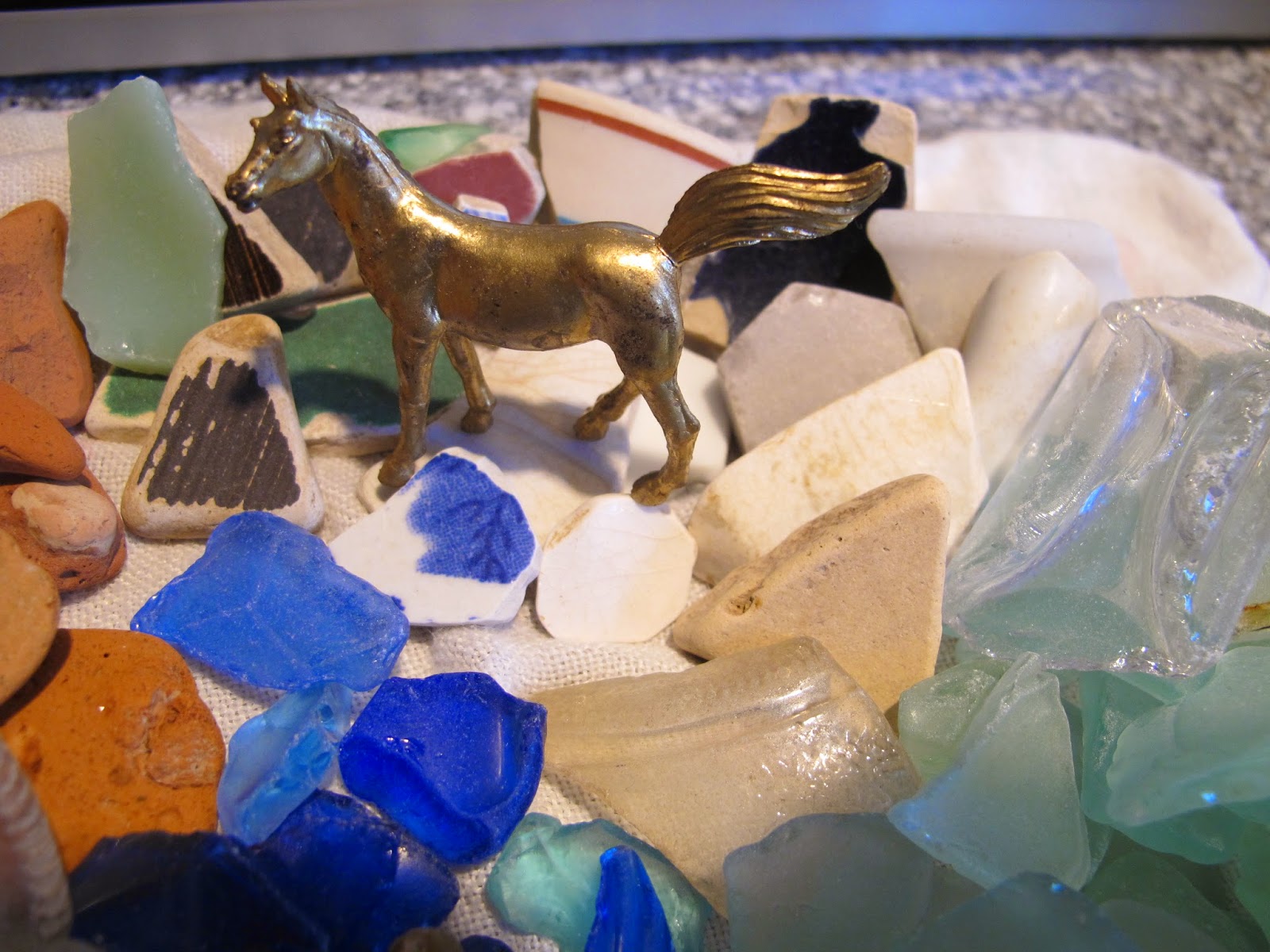 Labels: Life is a Journey, seaglass 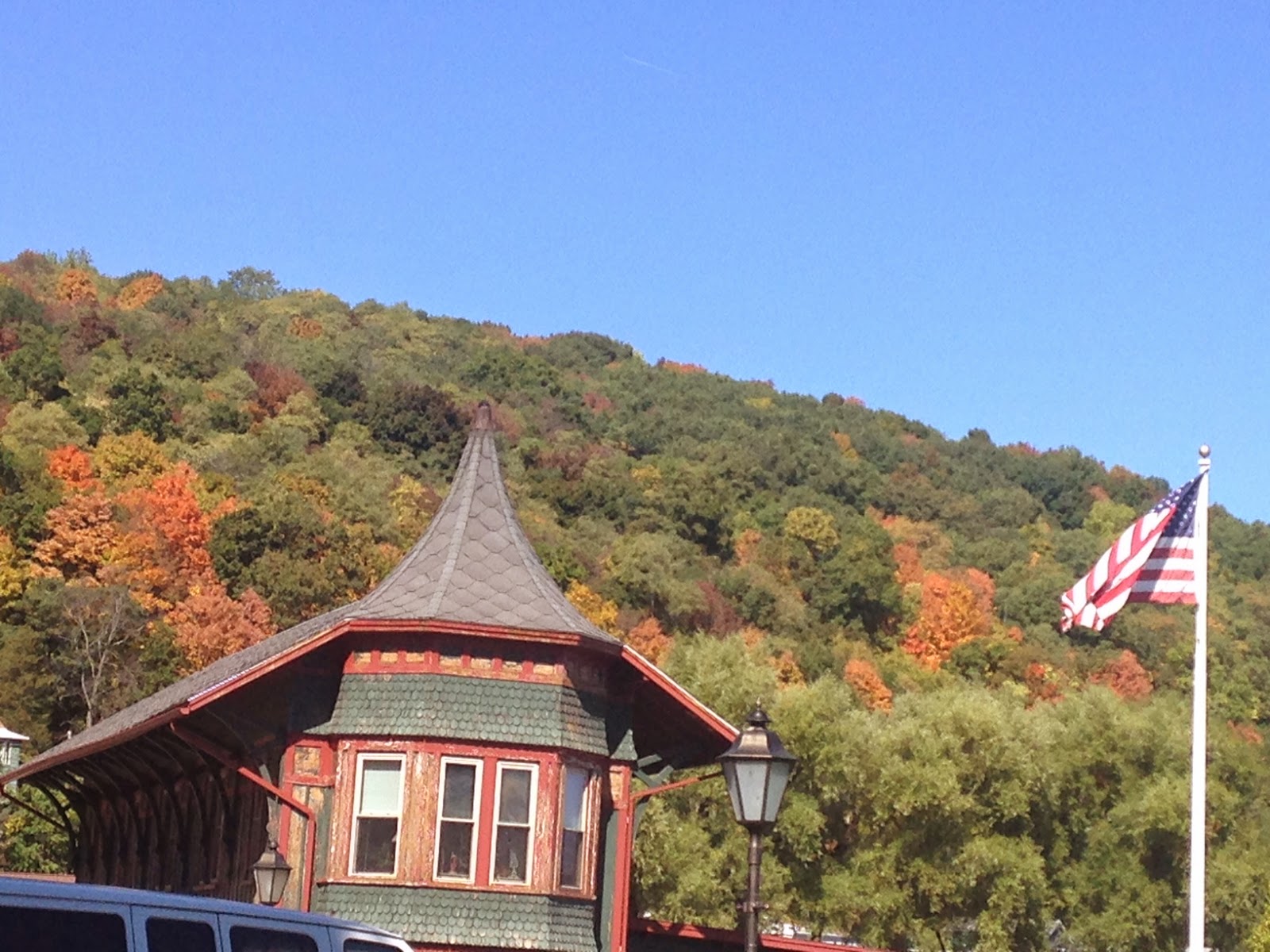 and we have been taking advantage of the 'INDIAN SUMMER' that we had last week...

J & I have been hitting the garage workbench to do a few 'last minutes' before the COLD sets in. and even bringing the Food Processor 'out-of-doors' to whip up a batch of totally 'toxic' HORSERADISH!!
Now that the holes are drilled, some new projects are on the horizon... 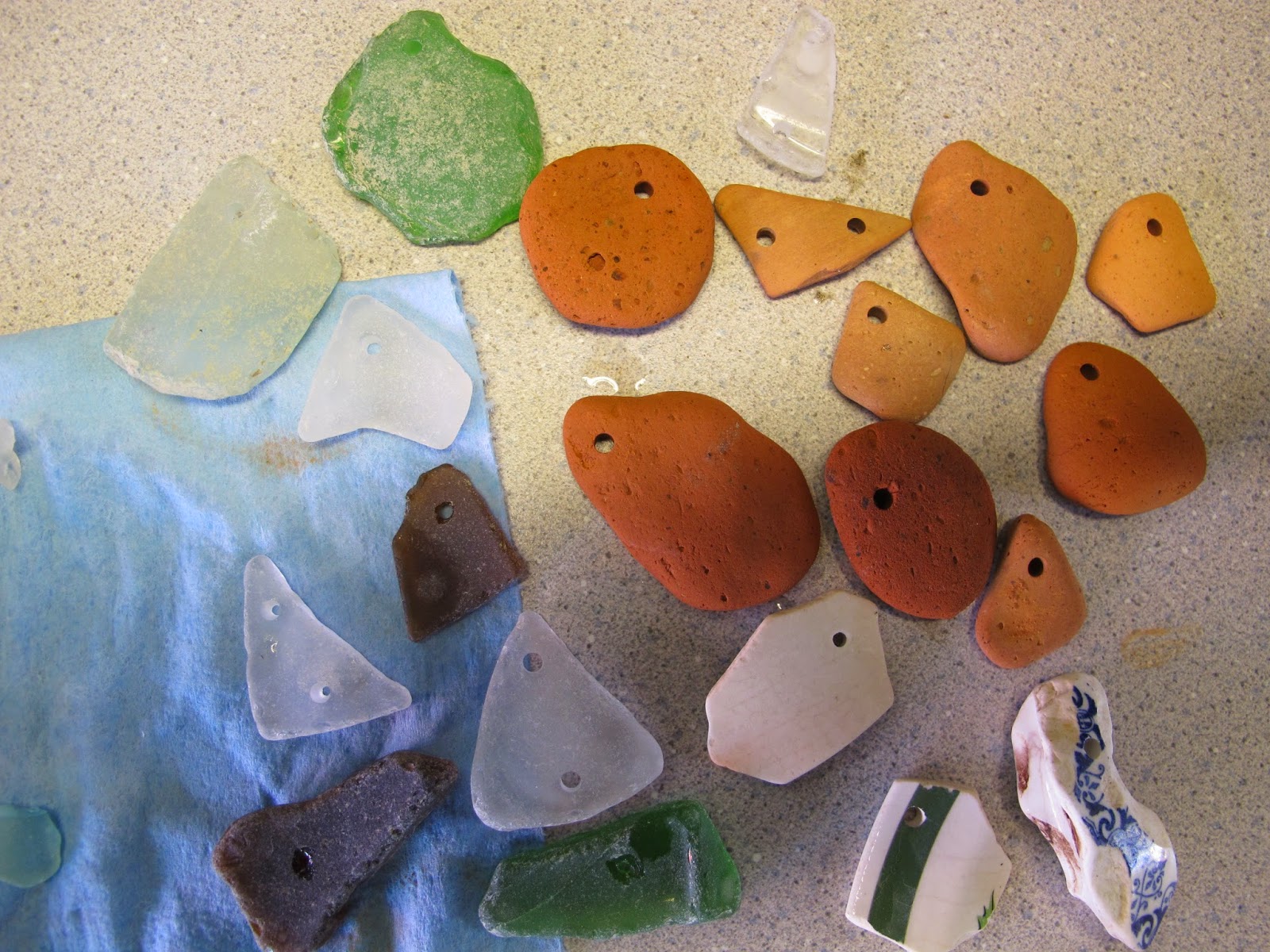 Wire-wrap PUMPKIN Pendants for a start! 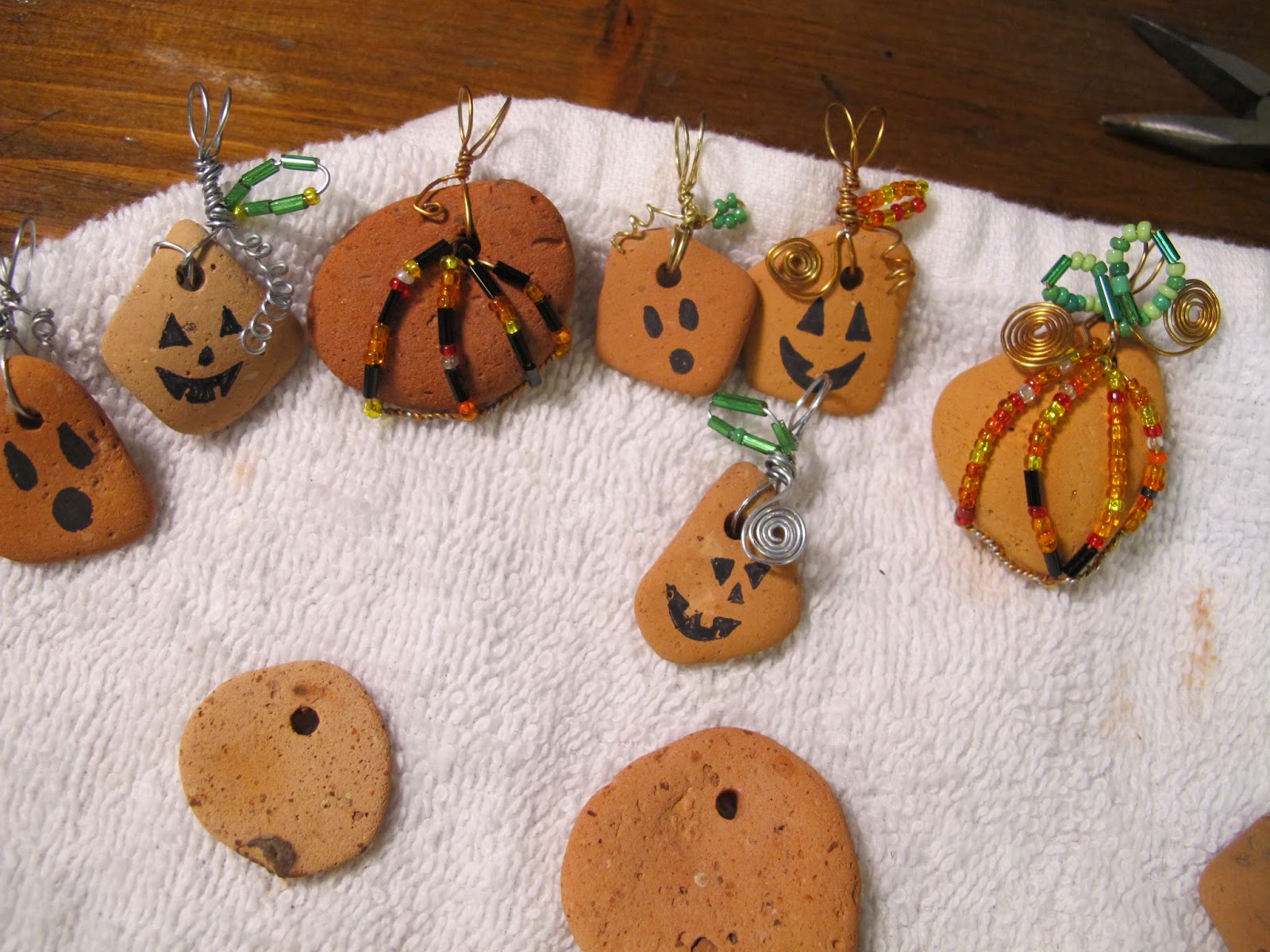 NOT-TO-FEAR,
saling has been on OVERLOAD lately - as a bonus of the local Nursing Homes and Churches getting in on the FALL-CRAZE, with their annual Bazaars & Rummage sales (7 this past weekend alone!!) 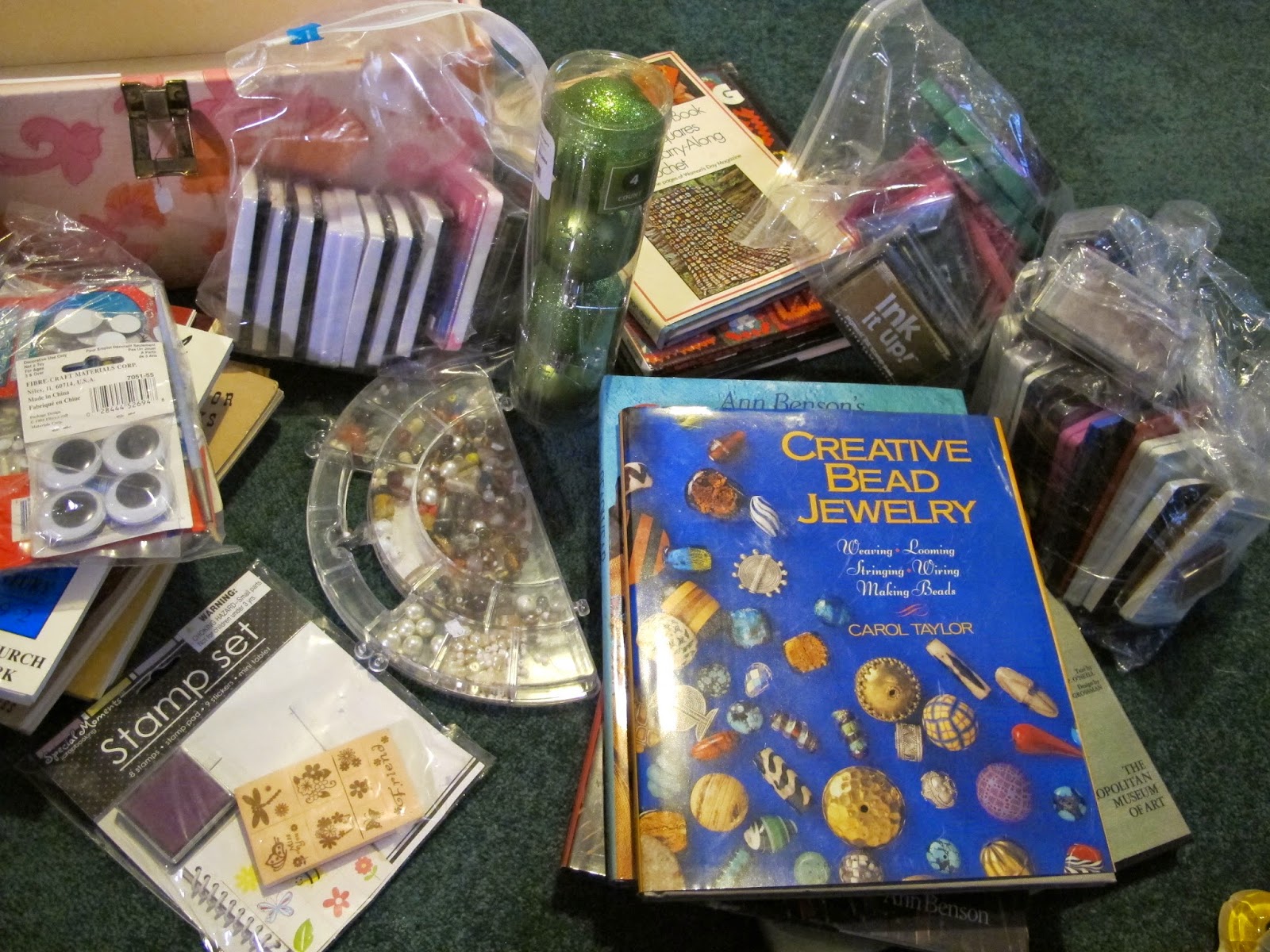 Tomorrow the doors close for the last time... What the next chapter in my journey shall be, I have no idea.  Good bye Nugents. 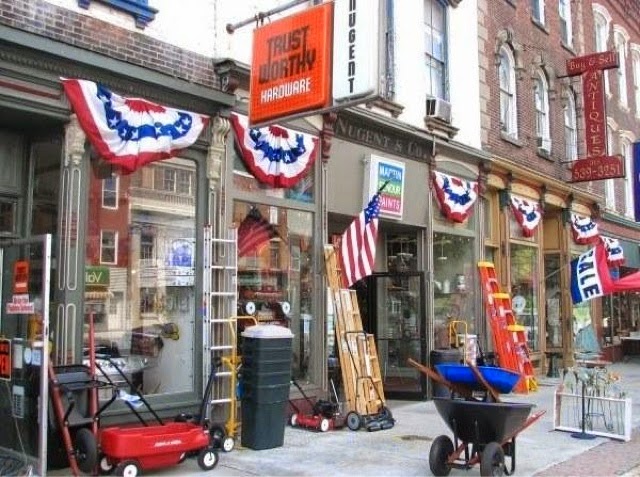