We have started a new 'venue' for Upcycleds... 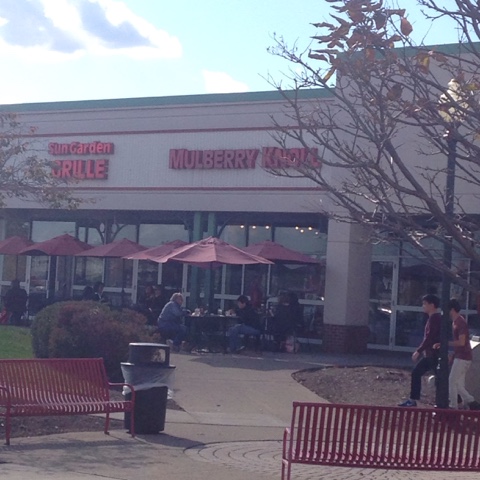 ...a little 'Boutique' of Handmades, Upcycleds and Vintage at a local Outlet Mall! 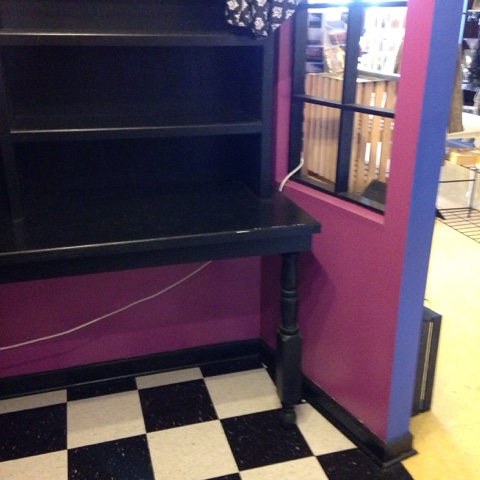 We have a little corner, 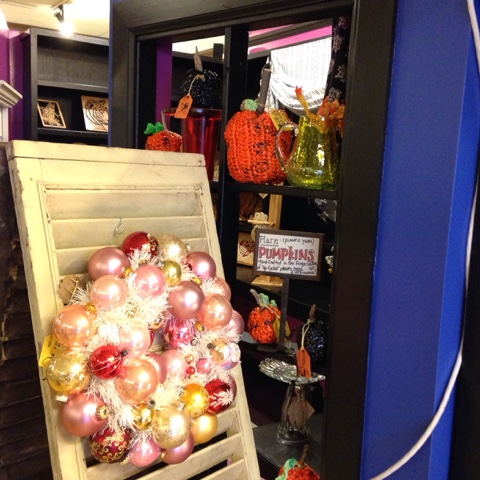 That we are QUICKLY filling! 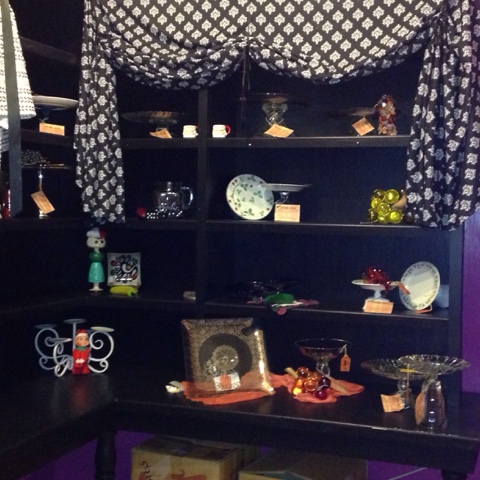 (As fast as these four hands can!) 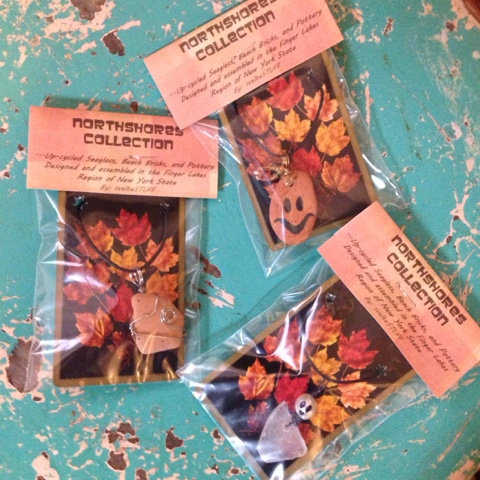 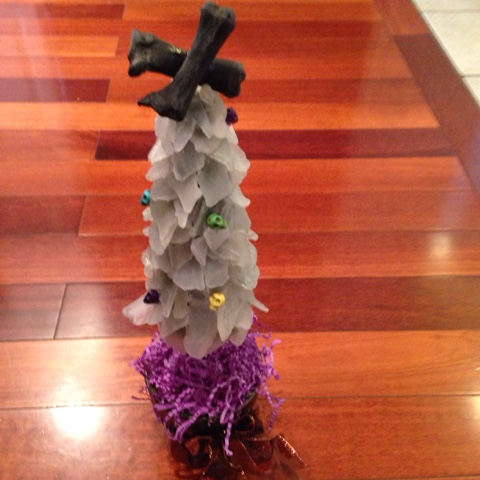 ...and Halloween seaglass creations- now the Hot Glue guns are on overtime in prep for the next seasons... 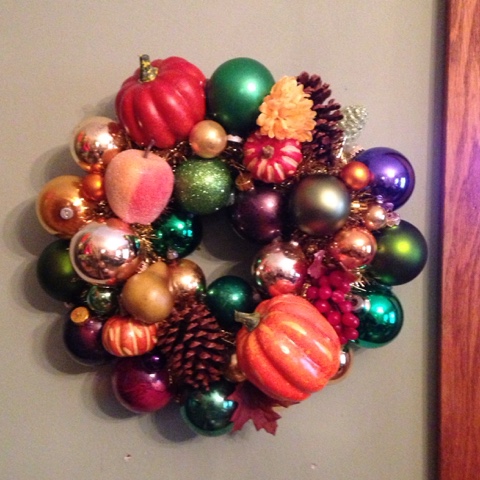 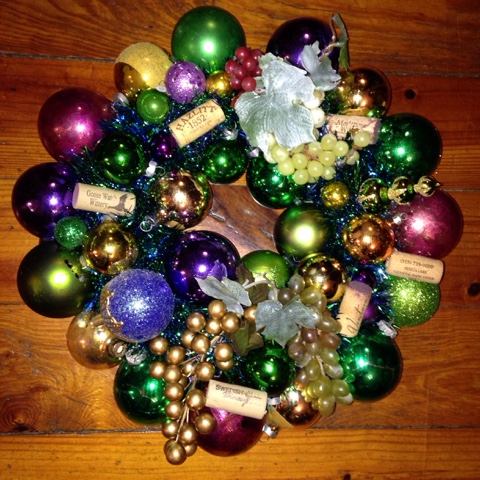 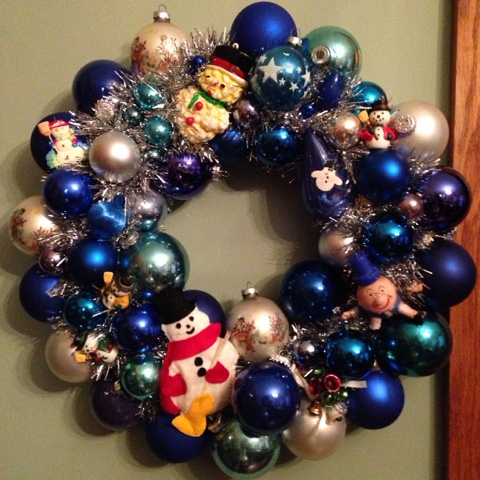 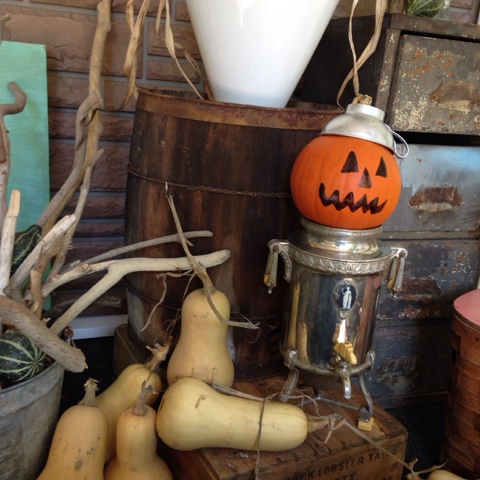 Every once in a while, you have one of those internet sales/purchases that REALLY touches a heartstring, and gives 'soul' to an object.  We had this happen in the last month, with what we 'had' thought to be 'an old bowl'...  it had crazing, and wear, but it was intact without any chips, so we decided we would give a try at finding it a new home... 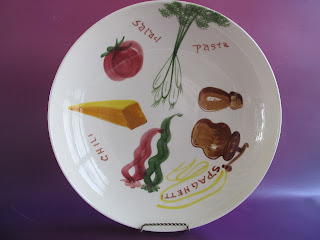 You see, J & I received a few LOVELY BOWLS as wedding gifts from dear friends... 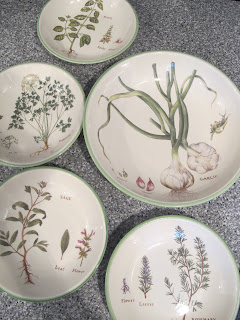 One of our favorite sets is a William~Sonoma with (4) side bowls in an herbal pattern... and you all KNOW my love of Herbies!!  I don't know if we have ever actually used the Serving Bowl, but we use the side bowls Very Often - perfect for salads and the like. 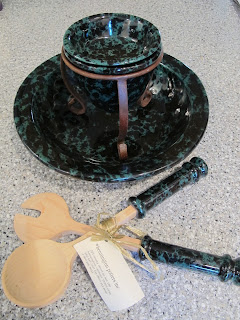 Our other BOWL that is in constant rotation is a BENNINGTON with matching salad tongs (and again, you KNOW my love of Bennington Pottery!).  As with the other, I don't think this bowl has ever been used for serving salad, but it comes out at every large gathering/party!  We have a matching Dip/Salsa Chiller & Bowl w/ stand that sets perfectly in the middle and the large bowl holds the chips underneath.  Makes 'perfect' sense ~ Right?!!

Now, back to our internet sale...
A women (C1) from the other side of the U.S. purchased the bowl, and asked to have it sent to a different address ~ her brother (X). We asked if it were for a special occasion - would she like it gift wrapped / greeting enclosed?   She then sent a note for us to include: (With her permission, I am inserting it here - though, somehow the photo of her original bowl won't convert to Blogger?!  Yes, it's long, but I couldn't figure out a good way to shorten it without losing some of the feeling!...)

I could write you a long story, one that would go on and on. You’d be reading so long, you might even have time to grow yourself a long, white beard by the time the story ends. Instead, I’ll spare you ALL the details and just write what is important.

As you may remember, 37 years ago, I moved from our hometown in Wisconsin to  Florida. I got a job at a fine department store where I was a floater. I floated from the shoe department, the lingerie department, to the Gift Department. Whenever I worked in the Gifts, I would stare at a very beautiful pasta bowl that was on display. I really admired it. Being the traditional Italian family that we were, it was my understanding that every woman have a special dish she served her spaghetti in. Our mother had one, our sister M was given one from our Italian Aunties at her bridal shower, and I figured I should have one when I got married as well.

It was July, 1978 and G and I were to be married. Because I was so new to the area and all the family very far away, my only acquaintances were the girls I was getting to know at work, and our new friends at a Youth Ministry. Because of that, there was no wedding shower, nor were any gifts sent. I knew if I were going to get a pasta bowl, I would probably have to get it on my own.

I didn’t make very much money as a part-time department store clerk. Purchasing a pasta bowl over so many other necessities was out of the question. I dreamed of having a bowl like that but the price was far from anything I could afford. The assistant manager noticed me looking at it one day and asked me why the fascination. I told her the story and added the fact that my family had just moved rather far away, and were not going to be able to make it to our wedding. In fact, no family members from either side were able to come.

We got married on a Friday night in a city park with just a few friends in attendance. I briefly recall one of my co-workers coming to our wedding and handing me a rather large gift box. She and several of the girls, along with the assistant manager, scraped their money together and purchased the expensive bowl as a gift. I cried when I opened it. It was the most thoughtful thing anyone had ever done.

As you know, our first daughter is getting married, and she too will need a nice spaghetti bowl. Realizing it was her turn, I looked online for the perfect bowl and could never find one as nice as mine. When I found this (the one pictured) on eBay, I knew I needed to buy it for her. It’s exactly like the one I stared at on the department store shelf 37 years ago.

While I was on my quest to find the perfect spaghetti bowl, I ran across the very same bowl our mother used when she served spaghetti! No one could appreciate that picture as much as you, J, M, C, C2, or I would. I had to blink twice to make sure I wasn’t seeing things. It was the exact bowl. I texted our sister M to make sure I was correct. Conveniently, she was on vacation visiting our brother J. Since M already had her own special bowl, I had her find out if J had one. M confirmed he didn’t have one.

So, I did what any GOOD sister would do. I sent him the bowl, along with the above explanation. He was very shocked and surprised when he opened the box. It took him back in time to days of loud family meals, and the smell of our rich family sauce permeating the air. The bowl was always heaped with a golden mound of pasta and frosted in red Italian gravy. The meatballs were the size of a cats head, lined up like ladies waiting to dance around the perimeter of the bowl. Our mouths watered until we had the first bite!

J and I talked on the phone for about two hours that night. He wondered why he got the bowl over any of the other siblings. I explained to him that I felt it only right I make sure our sisters had first dibs. M and I already had ours, C said although she never received a special bowl, it didn’t matter much since she is gluten-free and doesn’t eat much pasta. C2 has a bowl but rarely serves spaghetti out of anything other than the pot. It seemed only right that J, being the first born, receive the bowl.

Before J and I ended our conversation on the phone, he said, “Wouldn’t it be cool if we could find another bowl like this and send it to X from the both of us?” I told him I would check eBay again and get back to him. It was his idea, as well as desire to make sure you had one like Mother’s. Together we wondered if you had a bowl, or maybe it went out the door through harder times.

I wrote to your daughter and she confirmed you too were amongst the “bowless.” That was all we needed to send this your way. I wouldn’t have looked for this bowl right then if J hadn’t suggested it. I give him full credit for thinking of this idea and making sure you had one too.

We know it’s not your birthday, and Christmas is still a few months away. This gift was meant to let you know you are thought of, remembered, and closer to our hearts than the miles that separate us all. Please enjoy and cherish this gift from J and I, to you.

We love you deeply,
J and C1

Ps. Special thanks to the eBayer who patiently waited for me to write this letter so it could be included with the bowl. I believe they gift wrapped it just for you.

...and I'm happy to report that I just received a follow up note from C1~ The BOWL arrived SAFE & SOUND... X was 'tickled', 'hugged the bowl and admired it' and 'it reminded him of precious days gone by'.  Now he too would like to implement the spaghetti bowl tradition with his kids!!
Yes, it is days like this that make me 'SMILE'.  Do any of you have a 'special bowl' in your life??
Posted by svelteSTUFF at 10/08/2015 03:53:00 PM 5 comments: 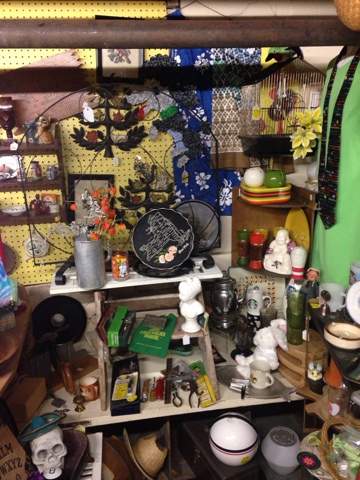 NOTE: No malicious intent to any fellow JUNK~STUFF Lovers out there.........
We went to visit my MIL in ICU last night - she's still groggy, but coming around...  In trying to make conversation, we were showing her pics from our phones.  We were telling her about our booth at the Antique Co-Op (the one 'plus' of Alzheimer's - EVERY time you tell the person something, it is Brand New!).  We showed her (the EXTREME MINIMALIST & devout Catholic) this picture of 1/2 the booth.  Her eyes grew WIDE...
"HOLY!  That's a LOT OF JUNK!"
*okay, so maybe you 'had to be there' to really chuckle....
Anyways, I can only imagine her reaction to... 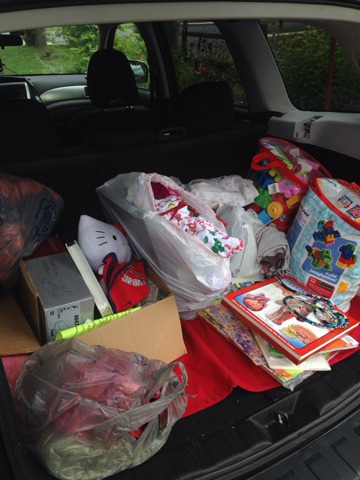 The back of our Subaru after I returned from the Inaugural October rummage sale!!!   The WONDEROUS sale where EVERYTHING IS .25c each (Except paperbacks=.10c) !! 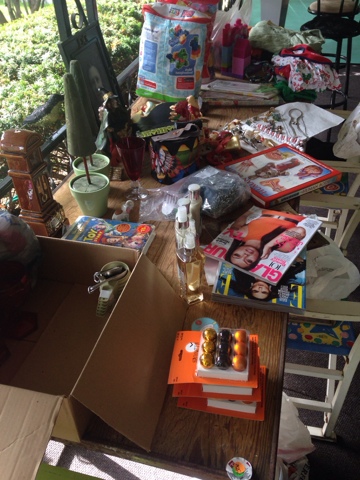 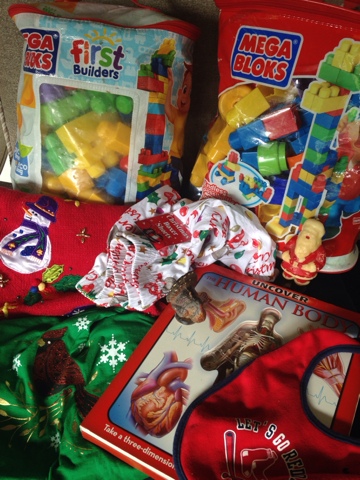 ...bits for ReSale.
~ Some last minute additions to our Ugly Xmas Collection (Amazing the $$ people will pay as soon as the calendar reads DECEMBER!)
~ Massive quantities of Mega Bloks- has anyone ever tried selling these?
~ Gurley Turkey! Must.leave.house.SOON or it will become a 'keeper'! 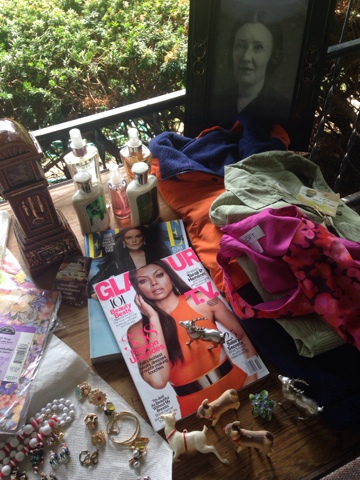 ...bits to keep
~ Fashion mags, Sterling chains&bracelet, NIP Bath & Bodyworks, and Ann Taylor sundress - who says I don't 'live large'??!
~ tissue & wrapping - can never have too much for shipping stuff!
~ I'm seeing those topiaries covered in white or green SEAGLASS!
~ May part with a 'few' of the plastic deer- maybe... 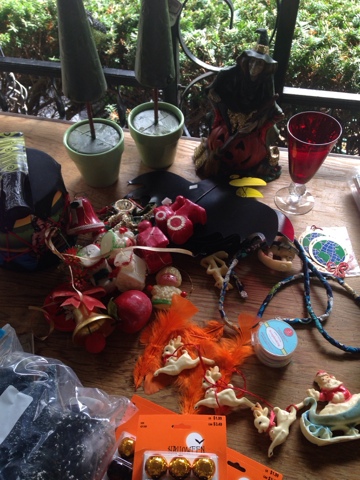 ...and crafting fodder Galore! (Does anybody have any info on Santa & Reindeer in bottom right?  They are made of wax!!)
NOW!
I MUST stop 'playing' and get Productive!  For Pepper-Grape Jelly is calling!!! 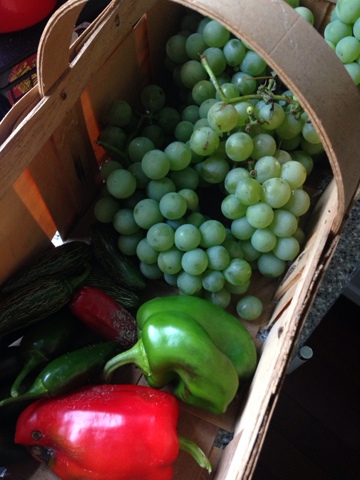