Of course in prep, there was the standard Cleaning, rearranging, Halloween decorating... oh, and breakage!


Time to get home and get down to BUSINESS!!
Saturday morning we added a 'new twist' to Pumpkin Carving weekend... 'Crafting'!  L had a desire to attempt the ever-popular ornament wreaths she had be seeing and hearing about, and I had a multitude of supplies in the studio, so....

I CAN'T leave you with THAT image!!
SO,
Back to our CURRENT SEASON 8-)


HOPE YOU ARE ALL ENJOYING OCTOBER TO IT'S FULLEST!! 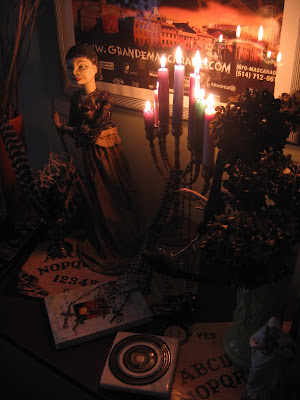 Friday morning I had NO INTENTION of going SALING (honest!!).  There was Lots that needed to be done at the store, and I was headed in early (7:30am), prepared for a l-o-n-g day.  BUT, what should I see when I was 10 minutes away from work?
A 'little sign', on a side road, as I detoured around construction work, ESTATE SALE FRI & SAT 9-2
Soooo....  I kept driving to work...  and I worked for an hour..., then F.I.N.A.L.L.Y., I could stand it NO Longer!  I explained the situation to my boss.  He told me I had better hurry, or I would miss all the good stuff!
I got there, and there were only 2 cars... no lines??
Did I have the right house? Right day? Right time?
Yes.  I went in.  I was the only customer there!!  They had done NO ADVERTISING!  Actually, they had done Very Little.  Parents house.  Kids came in and took what they wanted, donated the clothes to the local thrift, stacked the boxes from the crawlspace storage in the two bedrooms, then they put out SALE SIGNS and opened the doors.  No real organization. No prices.  Half the boxes had never been opened.  Kinda creepy.
I found a corner that had 'Holiday Boxes'... HALLOWEEN... I broke the ancient duct tape seal - Junk (bummer!), EASTER... pealed back the old duct tape, again - Junk (bummer!), onto the stack of CHRISTMAS boxes.  Now mind you, I'm still all.by.myself at this 'estate sale'.  Upstairs, in a corner bedroom,  just digging through dead peoples stuff... Really, almost wishing other customers would show up and hoping that the couple holding the sale aren't ax-murderers or something... but I've got more important things on my mind, like sealed Xmas boxes (like 'candy' to small children??).  After opening several more DUD CHRISTMAS boxes I open one that looks like it might have some okay stuff in it (I pulled out some mid-century plastic ornies...), rather than digging through to the bottom, I just grab the box and decide to 'get out of Dodge' while I can! 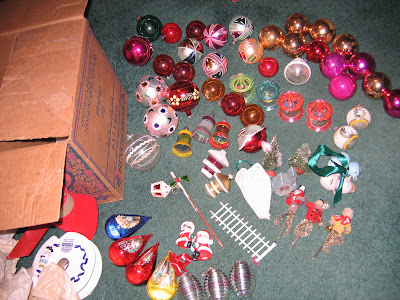 Last night, in the comfort and security of MY HOME, I unpack the contents of 'The' Christmas box... 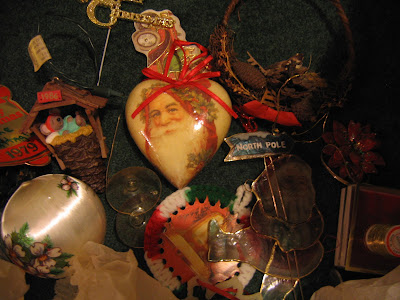 There was some of the usual 'junk'.  Some already in the garbage.  Others destined for donation. 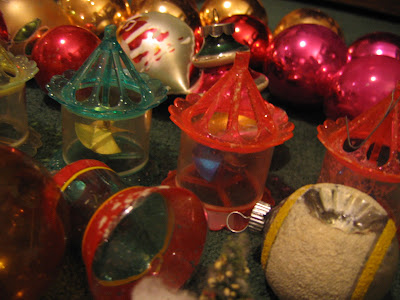 OH! and a set of 4 of those GREAT little Birdcage spinner ornaments!  I had to get those on Ebay quick before I got attached to them!! 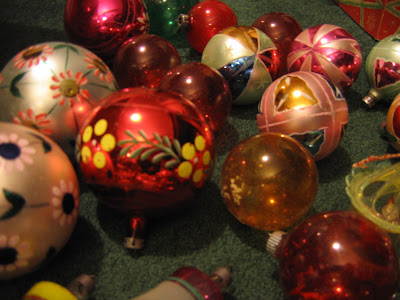 and handpainted Poland oversized Balls, and 1920's bells, and indents, and a few 'distressed' ones that I won't mind sacrificing to future wreaths, and atomic plastics, and, and - 51 keepers overall!!  ((sigh))

As well as the box of Christmas, I also purchased a large tote of crochet/hankies from the estate sale.  When I asked them how much for the two, they himmed and hawwed and we settled on $10.  They wanted to get rid of things - and obviously there weren't a LOT of customers!!  I haven't gone through the linen tote yet.  That is for another day 8-) 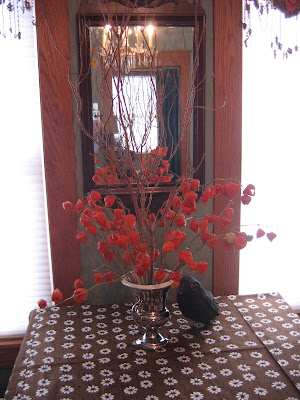 ... throw in a few Fall Craft Festivals with Church Rummage Sales to really get you into the SPIRIT, and Life is Good 8-)!﻿﻿

It's SOOO nice when things ACTUALLY go as  Imagined!
Case #1: THIS PIZZA! Attempted from a wonderful 'WE CAN DO THAT MEMORY' (come on, you know what I'm talking about!!).  White, fresh Basil leaf, garlic, meat, and fresh tomato 'replica' of a heavenly late nite 'pie' we had in NH a couple of weekends ago.  Turned out tasting as WONDERFUL as it looks!!!! 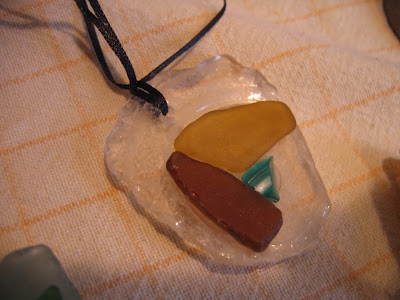 Case #2: Recent attempt at DRILLING some of my beloved seaglass to create some different types of pendants.  IT WORKED!!  (and the 'learning curve' was minimal - only a couple were broken in the process!)